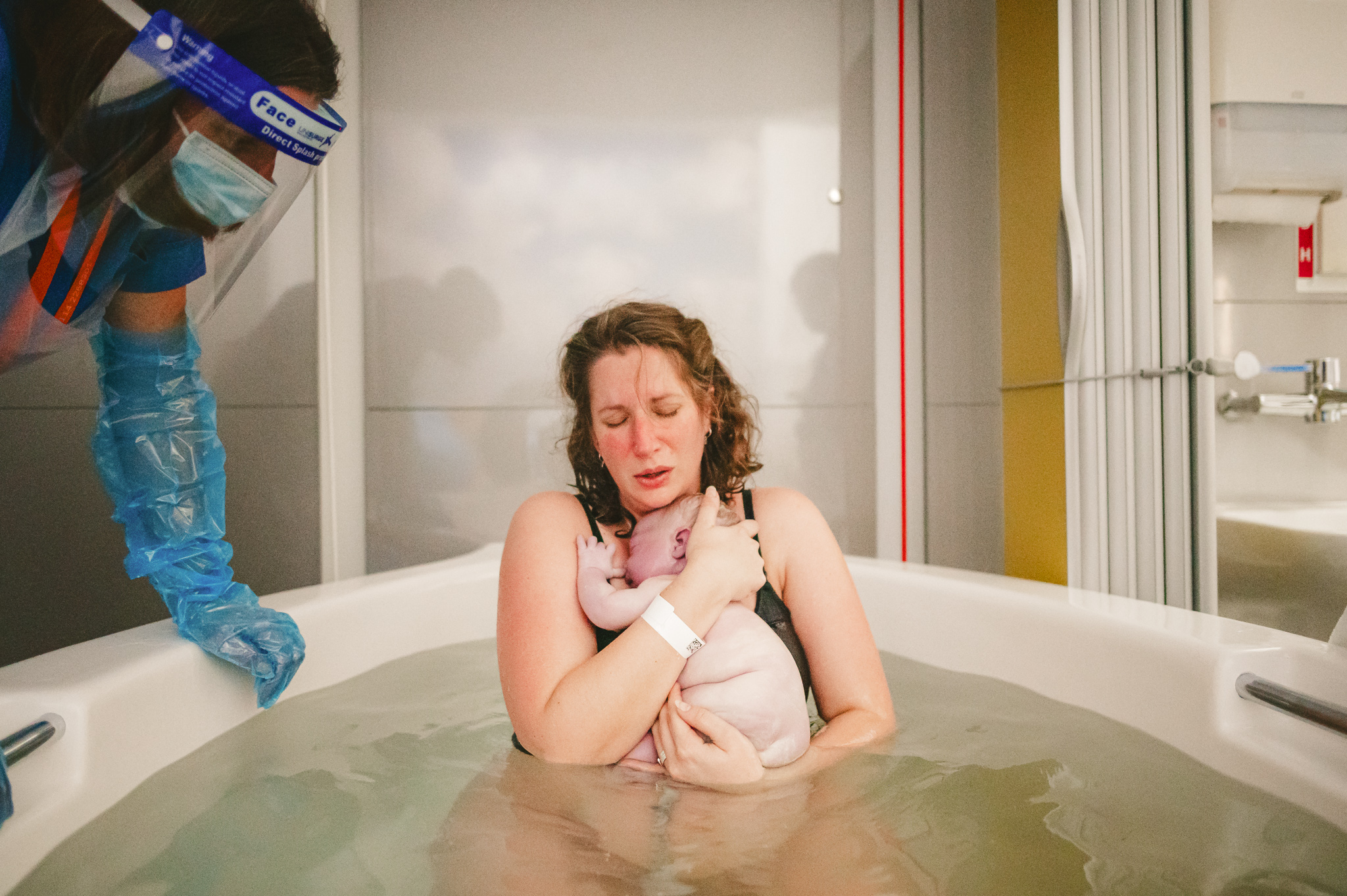 Rae and Col faced so many challenges in the run up to their birth, yet they navigated the twists and turns with such confidence and strength. I was so impressed by how they managed their experience to make sure that it was a positive one. From Covid 10, to a late diagnosis of Gestational Diabetes and then heavy snow, this birth story is an incredible portrayal of how important it is to stay flexible during your birth.

My husband, Colin, and I started Hypnobirthing classes with Lisa when I was about 6 months pregnant. We really enjoyed the course and were feeling as prepared as possible for the upcoming birth. We planned for a homebirth that would allow us to remain together throughout the labour and the hours/days to follow that simply wouldn’t be possible at out local birth centre/hospital due to Covid-19 restrictions. Our pregnancy was running smoothly and our community midwife was really supportive of both our homebirth plans and Hypnobirthing.

At 37 weeks I was sent for a precautionary growth scan as my fundal measurements had had a spurt before settling back to my regular line. A marginally high fluid measurement resulted in a referral for Gestational Diabetes testing, and ultimately a positive result. This looked to disrupt our homebirthing plans completely as our trusts policy was to induce GD mothers on their due date if they hadn’t already gone into spontaneous labour. Inductions were routinely handled in the consultant lead area of our birth unit – I was heartbroken and hormonal, needless to say there was plenty of ugly crying at this point. But we took stock and following an appointment at the Diabetic Clinic with one of the midwives and one of the consultants we agreed to postpone any discussion of induction until I reached 41 weeks and I was referred to the Consultant Midwife for Deliveries to discuss my birthing options, create a birth plan and write up the necessary risk assessments. Having originally planned on declining any internal examinations and sweeps, at this point I felt I would be happier knowing what was going on physically, and hoped that a series of VEs and sweeps would encourage the onset of labour without resorting to more intense forms of induction (alongside lots of exercise, using the birthing ball, curries etc etc!).

I had another growth scan and consultant Appointment just before I reached 41 weeks and whilst most measurements were “normal” the abdomen measurement was still much higher than others (97th line whilst everything else was 50th) so my consultant was (in a gentle and kindly way) still very insistent that her preference would be a consultant led, hospital birth, kicked off ASAP, whilst I confirmed that I still wanted the homebirth that I’d risk assessed with the Consultant Midwife as Plan A, with Pool birth at the Midwife Led Unit as Plan B if we reached a point where having my waters broken as a method of induction was felt to be necessary. I told them I’d be in touch within 48hrs when I had chance to discuss things with Colin, was 41 weeks and had a decision about induction. I eventually made the call that I would have my waters broken oat 41+2 (Friday) if I hadn’t gone into labour before then. On the Friday morning they couldn’t get me in at Labour Ward (lots of spontaneous labours so only the most urgent inductions) so was told to pop in for some monitoring at noon and they’ll try and get me onto labour ward from there. Once there my monitoring appointment was apparently running 2hrs behind schedule and left me frustrated and more stressed than I wanted to be at that point in my pregnancy so when they also couldn’t get me to labour ward that day, or the following morning, I declined all further observations and instead Colin and I spent Saturday relaxing, watching the rugby, and generally chilling out.

At teatime on the Saturday around 4 inches of snow arrived, so I jokingly said “if thing start now we’re going in not staying home” as I was concerned about the midwives being able to reach us and neither of us felt comfortable freebirthing/BBA. I’d been having semi regular Braxton Hicks the last few days but around 7pm these were clearly becoming surges. I moved from the sofa to the birthing ball to stay comfy as they increased in frequency, duration and intensity pretty quickly, and by about 10pm I told Col to get in touch with Triage. They promptly sent my community midwife out although we’d said we were happy to come in, but she got stuck about half a mile away so Col called triage to say we were definitely coming in. So down we trundled to the car from our third floor apartment, stopping regularly on the stairs to breath through surges, and pausing several times in the snowy gardens on our way to the car park for more of the same. We had a swift but cautious drive to the MLU where my community/homebirth midwife joined us not long after we got arrived.

The team that met us at the MLU were fully briefed on our homebirth and backup plans and sent us straight to a lovely room with a pool. I was so glad to see it! The duty midwife did some routine baseline checks (BP, HR, etc) and I also had her give me VE to see where I was at (6cm). I got in the pool quick as I could, about 20 mins after we arrived, and after a couple of surges I asked for some G+A too as the pressure was getting pretty intense, mainly because the waters hadn’t gone yet. My body started pushing, and very quickly my waters popped offering momentary relief but of course by this point the waters were quickly replaced with a head. Delivery of the head took a while, measurements later gave us a circumference of 36cm which would explain that one, but the body followed so swiftly I hadn’t even realised it happened until my midwife quietly said to pick up my baby, and I was able to lift her to my chest from between my knees. I had been in the pool for less than an hour so was very glad to get there when we did and get in the water quickly; she was not hanging about (about 7hours since the first recorded surge)! After some lovely skin to skin in the pool the midwife asked if we had looked at the gender, and that thought had completely passed me and Col by! A quick look confirmed we’d just welcomed our second daughter.

It was beginning to look like I’d lost a fair bit of blood so we decided to cut cord a little sooner than we’d initially planned, which would make it easier to get out of the pool and assess my bleeding etc. and Col was able to have some skin to skin time with her whilst the midwife checked me over. It turned out that the blood loss was fairly minimal but it did take quite a while to deliver the placenta, so I asked for the injection to bring things along, and the midwife had to help extract it, all intact, just a whopper!

Meg latched very easily and had a great first feed, then a good sleep, then another little feed a few hours later. She passed both her glucose checks (looking for hypoglycaemia due to my diabetes) and they kept us in the delivery suite until all other checks had been done so Col could stay with us the whole time (and get a nap in one of the armchairs!). My glucose levels were fine, iron levels too and Meg’s other checks all good so we were free to go by about 9.30am – a mere 8hours post partum! The midwives at the hospital and my home/community midwife were all incredible and so attentive to our birth plan.

Was a really great birth experience, especially following such a stressful few days (weeks!) and despite not being our initial plan. Our Hypnobirthing training had really empowered us to make informed decisions and to stick to our guns in the face of (unnecessary?) pressures, and kept me feeling confident and in control despite the changes in plans etc. 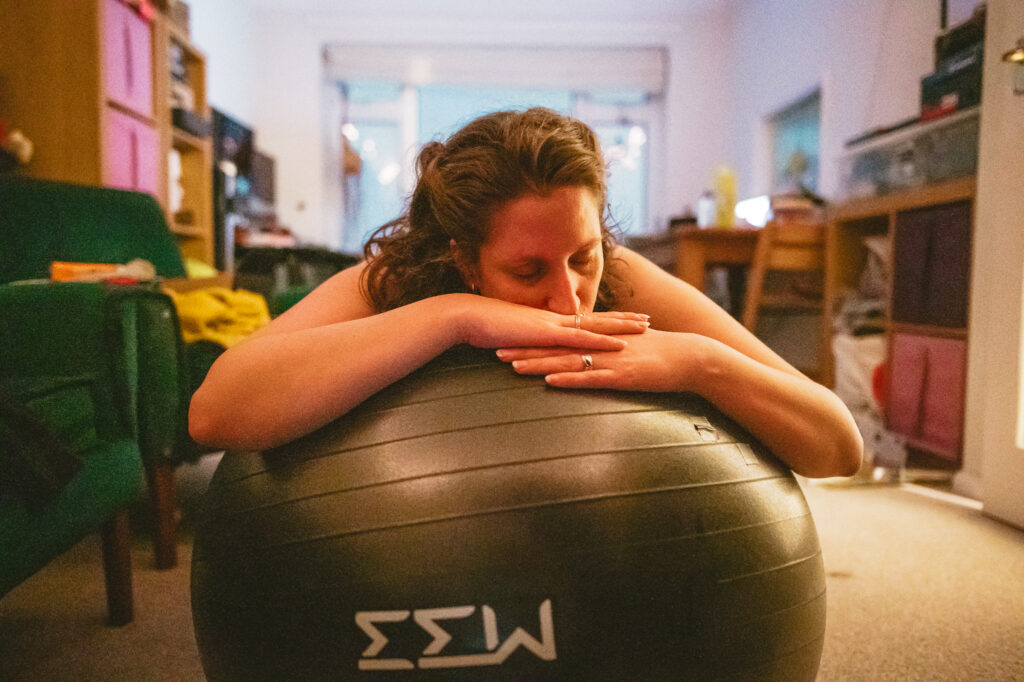 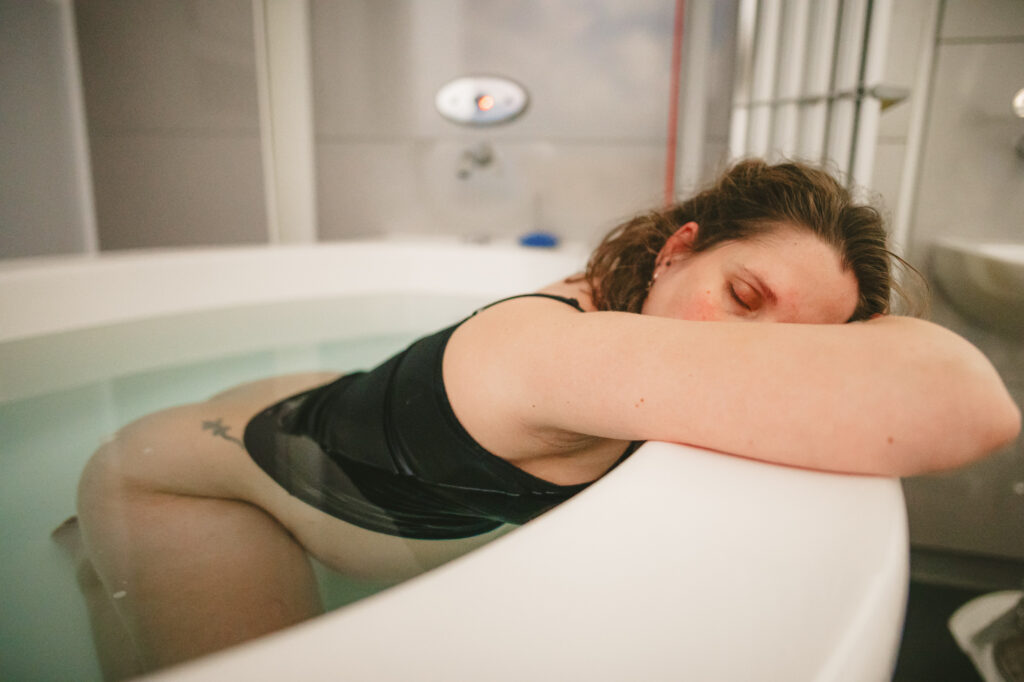 These incredible photos were captured by Col, very conveniently he’s a very talented photographer with his own business Peakography