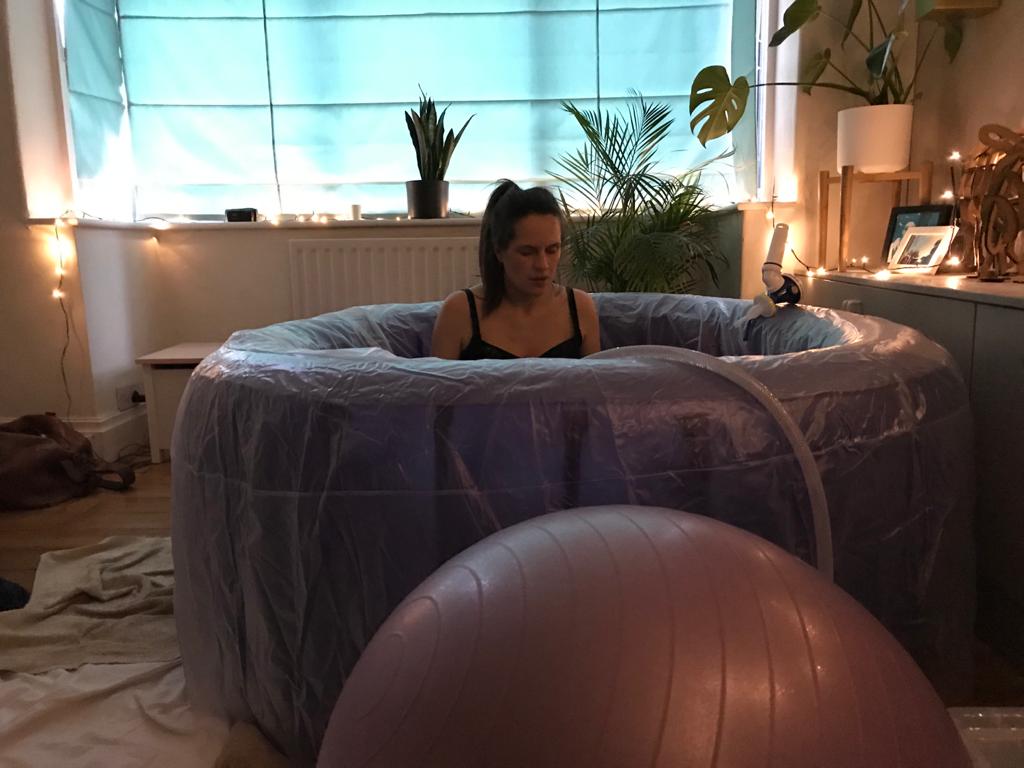 This is my birth story, it’s a long one, you might need snacks.

Baby Lily Hargreaves was born at home on Sunday 20th January at 11.35pm in Chorlton, Manchester after 42 hours from the first surge to finish.

I grew up being petrified of birth, I am such a wimp when it comes to anything to do with hospitals, needles, blood, operations -the lot. So for a long time, I just accepted that having a baby probably wasn’t going to be for me. Then the ‘broodiness’ hit in my early thirties and for the first time, it wasn’t for a Schnauzer puppy, I was broody for a baby. So after around a year of trying, including one miscarriage, we fell pregnant. Obviously we were over the moon, but then it hit me that I would need to get this baby out somehow. I decided that I wanted an elective c-section, that way I would have complete control of the situation, I would know exactly what was going to happen, and when, and I could eliminate any uncertainty and fear over how labour would pan out for me. Sorted. Then I read about hypnobirthing and did a complete u-turn, announcing to my husband that instead, I wanted a water birth at home. Bit of a change in direction! (That decision making process is a whole other story, which I will get round to writing about one day) So off we went, starting to plan our homebirth as first time parents.

I thought I would absolutely hate being pregnant, I’m a regular runner, so the thought of having to give-up my runs for plods around the park filled me with dread and I fully expected to be moody and miserable for 9 months. However, I surprised myself massively and took-to-it like a duck to water, I loved my bump and loved my new waddle. So all in all I had a great pregnancy, up until my “due date’ came and went. I knew that my due-date was a ‘guess-date’ and that I shouldn’t focus on it too much, but I just couldn’t help it. My husband and I had planned a homebirth and with each day that I went ‘overdue’ I grew more and more anxious about being made to be induced and made to give birth in hospital.

I was “due” on 10th January, which came and went, so I had a general check-up appointment with the Midwife on the 14th January, at which point they offered me a sweep (which I declined) and was told that they would need to book me in for an induction the following week. I was told that they had to book me in, as it was protocol, and even if I didn’t want to be induced I still had to go to the appointment to decline and allow them to monitor me. As you can imagine, this left me feeling quite stressed and disheartened, and a little bit ‘wobbly, and also quite angry that I was being told I was being booked in for an induction whether I liked it or not!

I had another midwife check-up on Friday 18th where again they asked if I wanted a sweep, I declined again, and asked instead if the Midwife could do a vaginal examination and test my Bishops score, to see how favourable my cervix was, to see if Labour was on it’s way or not. She found that my cervix was still quite far back and had to move forward before anything was likely to happen. So we decided to wait over the weekend and agreed that if nothing had happened before then then I would consider having a sweep on Tuesday. This made me feel a bit better, as I had given myself more time, and hadn’t agreed to anything that I hadn’t wanted to.

Saturday day
I started to have very very mild period pain like contractions at 5am on Saturday morning, so I left Matt sleeping and came downstairs to chill out. I had a cup of tea and watched a documentary on Netflix. Matt woke up at around 9am ish. I told him that I thought things were starting but tried not to get our hopes up. We went for a walk, the slowest walk ever, with me stopping every few minutes to breathe through the mild contraction and then went to a local cafe for a coffee, but the surges were getting a bit too unbearable to manage in public so we came home. My parents ‘popped round to drop off some old towels for the home birth prep!’ (I had plenty of towels, I think they just wanted to check up on me!) I was breathing through surges on my birthing ball and everything was generally quite relaxed. We had my hypnobirthing tracks on and around 6pm ish I started to use the tens machine, which was an absolute godsend as the surges began to ramp up more. 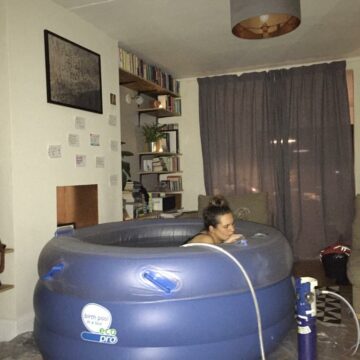 Saturday night
My surges were becoming quite strong, although they were still quite far apart. (6-7 mins) We called triage who said that since my surges weren’t close together there was no point in them coming out as labour was still quite likely to be quite a way off. So we soldiered on with breathing and the tens machine.
At about 1am the surges were getting stronger and more intense, so we called the midwives again as I was struggling quite a bit and just wanted someone to check me over. Jodie arrived at about 2am and found that I was 2 cm dilated. She told me to carry on breathing through and try to get some rest if I could, so at about 6am we went to bed to try and get some sleep, however, this was impossible, as I found it difficult to breathe through the surges lying down. So we came downstairs again to carry on. I used breathing and the tens to breathe through the surges which were tracking anywhere between 4 minutes apart to 8, so they weren’t yet consistent. I tried to eat and drink but couldn’t keep anything down. A particular low point was when I was being sick in the middle of a contraction:( 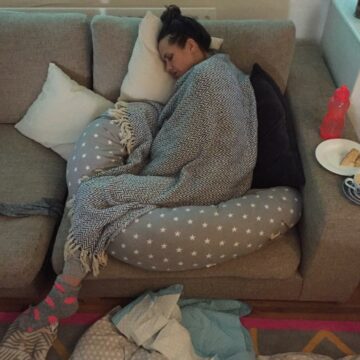 My hypnobirthing playlist was such a massive help throughout all of this, my friend had helped me to make a beautiful playlist and I honestly couldn’t have done it without music. It just helped me zone out into another world.

Sunday afternoon through to evening
I continued to labour all through Sunday morning until around 3.30pm when I told Matt that I needed more pain relief. I was worried because I was in quite a lot of pain by this point but my contractions were still really far apart. By this point I’d been experiencing surges for around 33 hours and hadn’t eaten or slept, and couldn’t imagine doing this for another day without any sign of labour progressing or the use of gas and air. So Matt called for the midwives again, who said that there was no point them coming out yet as my surges were still so far apart, but Matt pleaded with them as he could see that I was struggling.

A Midwife came out at 4pm and performed a vaginal examination which found I was 8 cm. This was a huge relief for us both, as because of my sporadic contractions, we thought that I wasn’t progressing much, so were envisaging another day of surges! Matt blew up the pool and the midwife went back to the hospital to get the gas and air. This was another particularly low point, as I was told beforehand in all my appointments that all the community Midwives carry it with them in their cars, so I had to wait another half an hour for pain relief to arrive, which definitely wasn’t ideal!

In the meantime, Matt was filling the pool with water and I carried on breathing through my surges, using the tens machine and zoning out to my playlist. Half an hour later I was in the pool and the gas and air had arrived.

Getting in the pool was wonderful, I instantly felt much calmer and in control and it was a great pain reliever. I absolutely loved the gas and air too, a little bit too much perhaps! It helped me ride the surges much more easily.

It felt like I had been in the pool for about an hour, but apparently I was in there for 5 hours, breathing and using the gas. At about 10pm I had this really euphoric feeling as I could feel her moving down, with every surge I tried to push but I found the pain quite intense. The MW checked me and found that my cervix had become quite inflamed and swollen which she said may be blocking the way for baby. At this point I think I lost my calm and control a little bit and began to worry and panic that this might be distressing for the baby. The midwife regularly checked the heartbeat and assured me that everything was fine and that I just needed to carry on breathing baby down.

I tried to birth for about an hour in the pool, using my surges to push the baby, but still no sign! The midwife asked if I would try birthing outside the pool, as sometimes, the warm water can slow things down. So in between surges I got out of the pool onto the floor. I tried various positions to breathe and push through surges and eventually settled with Matt behind me, as I sat up with Midwife in front of me. After a lot of coaching from Matt and my midwives I delivered Lily. The whole of my labour had been very calm and quiet up until this point, when the primal instinct took over and the poor neighbours were made very aware that there was a baby being born!

The delivery was strong, intense and difficult, I had expected to ‘breathe’ my baby out, however in reality there was a lot of pushing and coaching, but I did it! The transition period for me was quite overwhelming as I had felt completely in control and confident up until this point. Looking back, it was just the usual ‘transition’ phase which everyone talks about, that crisis of confidence and that powerful feeling that your body just can’t do this. Of course it can, and it did!
We had delayed chord clamping and the midwives busied around tidying their gear away and making notes. I had active management of the placenta and needed a couple of stitches, but I honestly don’t remember any of this part.I don’t remember it being painful or uncomfortable. I think I was running high on adrenaline and in shock that my baby was here.

My midwife made me a brew which I can still taste to this day, it was the best brew I’ve ever had in my life, it definitely had about 6 sugars in it.
My first contraction was at 4/5am on saturday morning and lily was born at 11.25pm on Sunday so I’d been in labour for nearly 2 days, and hadn’t eaten a thing, so it was a long and exhausting experience, but by far the best thing I’ve ever done in my life. It was tough, challenging, intense and yet so magical and empowering. All thanks to Hypnobirthing!

Things I couldn’t have done it without:

Things that I thought I would use but didn’t